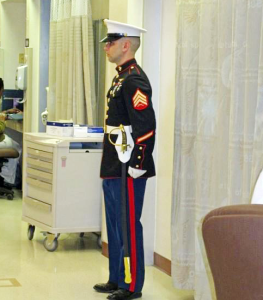 A nurse took the tired, anxious serviceman to the bedside. “Your son is here,” she said to the old man. She had to repeat the words several times before the patient’s eyes opened.

Heavily sedated because of the pain of his heart attack, he dimly saw the young uniformed Marine standing outside the oxygen tent. He reached out his hand. The Marine wrapped his toughened fingers around the old man’s limp ones, squeezing a message of love and encouragement.

The nurse brought a chair so that the Marine could sit beside the bed. All through the night the young Marine sat there in the poorly lighted ward, holding the old man’s hand and offering him words of love and strength. Occasionally, the nurse suggested that the Marine move away and rest awhile. He refused.

Whenever the nurse came into the ward, the Marine was oblivious of her and of the night noises of the hospital – the clanking of the oxygen tank, the laughter of the night staff members exchanging greetings, the cries and moans of the other patients. Now and then she heard him say a few gentle words. The dying man said nothing, only held tightly to his son all through the night.

Along towards dawn, the old man died. The Marine released the now lifeless hand he had been holding and went to tell the nurse. While she did what she had to do, he waited.

Finally, she returned. She started to offer words of sympathy, but the Marine interrupted her, “Who was that man?” he asked.

The nurse was startled, “He was your father,” she answered.

“Then why didn’t you say something when I took you to him?”

“I knew right away there had been a mistake, but I also knew he needed his son, and his son just wasn’t here. When I realized that he was too sick to tell whether or not I was his son, knowing how much he needed me, I stayed. I came here tonight to find a Mr. William Grey. His Son was killed in Iraq today, and I was sent to inform him. What was this Gentleman’s Name? “

The nurse with tears in her eyes answered, “Mr. William Grey………”

The next time someone needs you… just be there.

Call them friends. Call them God’s angels. Maybe they are both, but I am blessed, a million times. They are the heavy-lifters. The ones who stay through the night with grace and charity. They are the true “Marys” of the world.

Today, more than ever, it’s a sweet drink of water in a blazing hot desert to find someone reaching outside themselves and their own skin.

Having my darling grandkids over the weekend caused me to think again… how do we make sure they are raised with empathy and the proper level of self-esteem?

The two girls who bullied Rebecca Sedwick in Florida to the point of suicide were perfect examples of the narcisissm that has become so prevalent in our society today that it’s overwhelming. Sure, “hurting people hurt people.” I am more familiar with psychologically-fractured people with a heightened and inorganic self-love who play on the weak and vulnerable.

You know, the naked emporer. He swoons and he crows, spinning tales of his greatness at the cost of others, completely oblivious that he is the butt of the joke. It’s those vulnerable and unsuspecting victims, probably like Rebecca, that lean into the grand illusion and take the bully’s belief as their own.

The moral of the story may be: Truth will set us free. Still, some are simply genetically pre-disposed to “reading their own press clippings,” and there’s just not a lot that can be done to cure that.

I may be playing old tapes, but I read with interest a recent op ed in the Wall Street Journal (love my subscription! What a thoughtful gift!) titled, “The College Admissions Passion Play.”

I am certain I know that 15-year-old! He grows up to think he’s Einstein because he knows a few arcane facts and can’t function enough to get a job. Because of the continued and internally-mysterious pain of his dysfunction, he can only find relief in putting those within proximity down.

So we reward them in college where they become cemented in their own superiority and the world must deal with their tainted view of reality throughout the course of their lives. And if we are very lucky, they will pass it on to the next generation because there is absolutely no price too high in feeding their narcissistic supply.