The eye of Peter 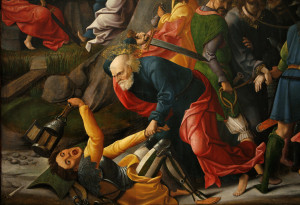 I think of so many things I want to write during the day. The end of the day is just another story. Particularly these days. It seems all I do is go go go.

While it’s the feast day of St. Charles, I’m in a St Peter mood. He had spunk and fight and so many sweet and honest vulnerabilities.

To my dismay, the artist on this work is unknown, but probably French (sigh). It was salvaged after during WWII.

He means business. He’s pissed and ready to do battle.

Now why he aimed for Malchus, a servant rather than take out the soldiers flanking Jesus: Your guess is as good as mine. But when you’re mad, you’re mad and any ear will do.

I’ve certainly had days that I’ve wanted to lop off a few ears.

St Peter removed the appendage as soldiers came to arrest Jesus. With them were some officials from the chief priests and Pharisees. Jesus of course, healed the ear which really had to rattle his sword-waiving friend.

I told my oldest grandson the other day (6) that he should go to Mass with me on Sunday. He said, I don’t know if I like church.” I responded, but don’t you like going out to eat afterward?

He thought for a minute and said, “Actually Grandma, maybe I do like going to church.”

Sometimes it’s as simple as “give us this day, our daily bread.” 🙂