The joy of life And Jesus said, “Build the wall”

A socialist pope in a capitalist nation 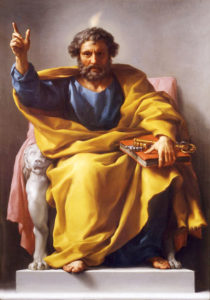 Pope Francis has criticized capitalism on more occasions than I care to recount. “An unfettered pursuit of money rules. The service of the common good is left behind,” he says. Certainly inside his contextual world, it was. Argentina is definitely today’s best example of the evils of socialism, communism and the corruption it has yielded without exception throughout history.

However, the most capitalist nation in the world is also known as the most benevolent. God never intended his children to be beggars. He intended that they be productive members of society, interconnected and successful. Giving according to their talents, and giving to those in need–by their own free will and choice, not by a socialist mandate (which voids it as a charitable act).

But more on this at a later time.

At this moment I am moved by a church bulletin I was handed as I walked into Mass today. It’s not my church nor is it my pastor, but it’s the church I usually go to for Mass. I, like so many, am a wanderer because I am regularly distracted by liberal priests and their self-involved agenda. (A common problem in California where the water has been tainted with smelt droppings that are known to cause liberal hallucinations).

This particular pastor shares socialist leanings with Pope Francis. And like Pope Francis, takes great delight in sharing these beliefs as rock solid teachings of our Lord Jesus.

And I quote his musings in this Sunday’s bulletin: “A Loving and Concerned Pontiff! Our Holy Father, Pope Francis, during is recent visit to Columbia reiterated the kind of Catholic Church he dreams of. Knowing a Church of ecclesiastical triumphalism is a thing of the past, in an interview with a Jesuit publication in 2013, Pope Francis compared the church to a field hospital…” No matter what this pastor’s message was beyond this opening, he lost me with his first two sentences.

Ecclesiastical triumphalism is a thing of the past? Like nationalism, right?

God is a triumphalist: “Now thanks be to God, who always maketh us to triumph in Christ Jesus” (2 Cor. 2:14). Christ is the greatest Victor: “Have confidence, I have overcome the world” (John 16:33). What’s more, the faithful share in His triumph: “This is the victory which overcomes the world, our faith.” (1 John 5:4). And let’s not forget that the Blessed Virgin is rightly called Saint Mary of Victory.

Ecclesiology is the study of the Christian Church, the origins of Christianity, its relationship to Jesus, its role in salvation, its polity, its discipline, its destiny, and its leadership.

Triumphalism is the attitude or belief that a particular doctrine, religion, culture, or social system is superior to and should triumph over all others.

Earth to Father: By the grace of God, ecclesiastical triumphalism is alive and well, and we shall overcome. In fact, that we have the message of Christ’s victory is core to who are are and who we shall be. Says Brother Andre Marie in his writing, “In praise of Triumphalism:”

“Triumphalism” is a bad word in some circles. That those circles have been influential in academic, ecclesiastical, and civil society in recent decades helps to explain our sad lot. I’ll not forget the perplexity that overcame me when I read a passage in the writings of Yves Congar, in which that great Dominican progressivist criticized those sentimentally pining away for another baptism of Clovis by another Saint Remigius. He was referring to traditionalists. Given Congar’s French nationality, and that the historic event he made light of constituted his nation “the eldest daughter of the Church,” I wondered at the iconoclasm of it all.

Then there’s Ultramontane triumphalism which Elliot Milco speaks of in his piece, “Two Kinds of Triumphalism.” That’s the type of triumphalism I think of when I read such narrative from my Sunday bulletin.

Ultramontane triumphalism often ends in despair, because when the imperfection and profound weakness of our shepherds is revealed to us, this kind of triumphalist sees what is a lamentable fact of the corruption and corruptibility of wayward men, as a contradiction at the very heart of the faith, and as a failure of Christ, who promised to sustain his Vicar and protect him from the forces of hell.

And finally, I was moved by Protestant Minister Bob Howard who tells a most compelling tale in “The Last Gasp of Ecclesiastical Triumphalism.” He says that beyond the modern-day mega churches, people crave meaning. As we move beyond the Christian era, we must provide the “strong meat of the Gospel.” We must speak God’s truth. The world seeks substance in this post modern world, especially in a country that sometimes seems to be steadily forgetting it’s history. Indeed, it’s time to remember the cross we bear in following Christ–and it’s not relinquishing our great and mighty capitalistic democracy or abandoning our personal freedoms to a government.