Everyone lies The best all hallows eve, bar none

Impermanence is our home 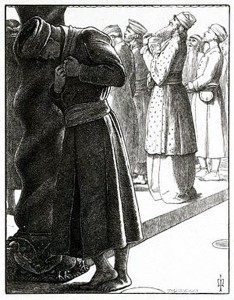 Today’s reading was about the Pharisee and the tax collector.

In a nutshell, the Pharisee was a religious, self-assured in his study and fully compliant to the rituals (prayers and offerings) of his faith with a healthy dose of peer-approval; he probably had a number of unsuspecting benefactors and admirers.

The tax collector was a disdained and despised member of his temple and community, and considered an outcast with no stature or respect within the synagogue.

Still, the tax collector showed up. He likely knew he would get scowls. Certainly he knew he would get disapproving sighs as he made his way to his place at shul to pray to his creator. He had to have at least a small pang of angst as he considered the piercing eyes of human judgement upon which he would publicly fall short, week after week.

He stood in the shadows. He closed his eyes and kept his prayers to himself. I know the tax collector. He goes to my church. He sits in the back. In a corner. Way over to one side or the other. There’s just something about his demeanor that you know he is there for something other than to impress those around him, and maybe even struggling with being in the presence of more expert and worthy Catholics.

Still he has persevered and has chosen to come… not to punch his prayer card, or make a public statement, or even because he might get chided for missing Mass.

Jesus’ telling of this parable concludes that self-awareness, truthful rather than over-inflating our self-value or worth by virtue of punching the time card of ritual, is further down the path toward God than window dressing. An ernest relationship with the divine, something that is not found solely in memorized prayers, is the path to God. Our value is not in compliance, but in mercy; something we all garner equally no matter our standing.

There we sat in church thinking and meditating on this parable and laying it against our own experiences; including the homilist, for the homily was about nuns. Sisters who were self-aware of their shortcomings and those who were not. Those who had a good death and those who may have not.

I don’t even know what the homily meant so I guess it wasn’t meant for me. And that’s OK. For it readily seemed to me that the “co-parable” used an example of internal players (i.e. nuns). These are all agents of the church. It seems to me that Jesus used an example of someone who was part of the church’s “good” Jews (Pharisee) versus someone who had absolutely nothing to do with the church’s infrastructure (tax collector) on purpose.

And I’m just saying because the farther I get down the road, the more certain I am that I have absolutely nothing in common with those behind this virtual wall of ritual. It may be a moment in time for me, but it feels like a chasm. Self-awareness is something that is missing in us all to one degree or another.

Especially in this, the age of narcissism, an angled projection of truth from inside our heads that often perpetrates divine fact.

If you think about it, there is a tax collector in us all. The difference is the amount of divine truth we let shine upon our earth-bound lives. But I’m sure the crowd was too simple for such a message. We all live in our own heads.